Alameda County is California’s seventh most populous – with more than 1.6 million residents. Naturally, in a county this large, the demand for efficiency in the services it provides is significant. From a systems perspective, to meet this challenge, Alameda County employs almost 200 IT professionals in its Information Technology Department (ITD). ITD largely uses Microsoft technologies and has a track record of true digital innovation as you can see in YouTube video. They have implemented many use-cases to digitize traditional paper systems, including a Property Canvassing System, updated Legislative Platform, Registrar of Voters, and much more.

Alameda County is comprised of 21 different agencies and departments, each operating in a very independent fashion. However, in some areas each has similar processes in common. Therefore, when one department wants to automate and use DocuSign to streamline a process, it affects many others as well. This led Alameda County to achieve a greater Return on Investment (ROI) by considering how to develop DocuSign interfaces in an open and configurable way that can help multiple departments at the same time with minimal configuration. While the use-case for any one department may be different than another, there were common threads, such as sending documents to be eSigned, storing signed documents into a document imaging system, integration with an Enterprise Resource and Planning (ERP) system, and more.

The pilot for polling place leases was so successful that Alameda County quickly adopted a digital transformation strategy and expanded to more than 50 use-cases. While many of the initial use cases were internal to county operations, such as HR, some were externally-facing as well. There are too many use-cases to document in this API case study, but here are a few examples:

As if the incredible efficiency of Alameda County’s digital transformation strategy wasn’t enough on its own, there was another goal in mind. They set out to be the greenest county in California. Not only has Alameda County won awards for their reduced carbon footprint of vehicles and lead certifications in buildings, the county has also worked hard to reduce paper consumption as well. This is good for the environment, and also saves storage space and associated costs. All the paper forms required by the county in the “old days” had to be stored somewhere, and the storage costs were increasing every year.

Alameda County set a goal to reduce paper consumption by 25% by 2020. They met that goal four years early! Therefore, Alameda County increased the goal to save 40% by 2020. Perhaps by adopting DocuSign into more use-cases, that goal will be met early too.

As the Alameda County ITD started developing integrations with the DocuSign eSignature API, it became obvious that they needed to develop an approach to code reuse. They needed a way to leverage existing IT investments to rapidly develop solutions for new use-cases.

Being a Microsoft .NET shop, lead developer, Laura Busuioc, designed and developed a library of standard C# objects that accesses the DocuSign eSignature API and the IBM FileNet API. Alameda County started using the DocuSign eSignature API before the C# SDK was available, so Laura’s library makes native API calls and wraps them into logical units of work, such as creating and sending envelopes, working with FileNet storage, parsing variables, and much more.

Laura also developed a SQL Server database that essentially functions as a “DocuSign eSignature Server” by enabling the Alameda County IT Department to essentially configure all use-cases from metadata stored in the database. Laura designed the system with strict object naming conventions and rules that govern how to configure and manage FileNet storage and DocuSign templates for all current and future use-cases. Figure 6 shows an example of the database configuration for FileNet.

After FileNet parameters are configured, the next step is to map FileNet properties for a given use-case (which is assigned a specific Id value. The Id value corresponds to a DocuSign template that will be used to send documents to recipients. The FileNet properties map directly to fields (tabs) within the DocuSign template. The reason for doing this is so that after a document is electronically signed, all relevant metadata for the specific template is stored along with the document in FileNet. Therefore, it’s not just a document stored in a folder, which would force the user to open the document to see pertinent metadata. As with all configuration data at Alameda County, this mapping is stored in the SQL Server database, which is shown in Figure 7.

In Figure 7, you’ll notice the Value column contains some rows with a ## annotation. This is a design convention adopted by ITD that acts as a variable, indicating the system should look for the specified DocuSign template Tab name and substitute the value at runtime as it stores the completed document in FileNet.

Many of the internal requests from individual Alameda County departments are simple forms that need to be automated. Specific use-cases dictate which fields are needed on the forms, but the concept in many cases is the same. An employee needs to electronically sign a document that contains one or more fields and needs to be stored in FileNet for some further action to take place.

One such example is for deferred compensation of employees. Deferred compensation (similar to a 401K retirement account) signup is a simple form that must be electronically signed, then the HR system picks it up from FileNet. Figure 8 shows an example of this form. 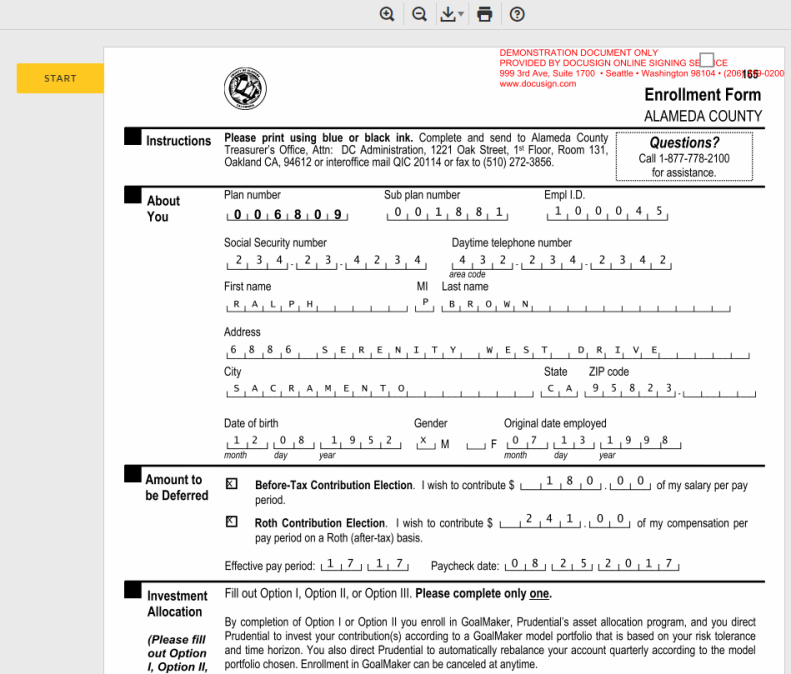 As you might imagine from prior examples, this form was generated automatically from configuration data in the SQL Server database. The configuration includes virtually every element shown in Figure 6, including the banner image, the name of the form, all fields, and which ones are required.

Alameda County looked at using standard DocuSign PowerForms, but wanted complete control over look-and-feel (to look like their internal web site), as well as the ability to create the forms dynamically using configuration data. Therefore, they created their own “custom PowerForm” and HTTP listener that responds when the custom PowerForm is submitted to DocuSign.

So how big was the army of IT engineers to create all this custom DocuSign API integration functionality to handle an unlimited number of use-case scenario requests? A grand total of two! Alameda County’s approach was to spend the time upfront to design a robust and scalable system to make onboarding new scenarios almost trivial (in some cases).

If That Isn’t Enough…

Despite the relatively large number of use-cases where Alameda County incorporated DocuSign into various processes, it has mostly been on a case-by-case basis. However, based on the success of Alameda County’s implementation of DocuSign and the integration of the eSignature API into their systems, in April 2017 the board of supervisors approved an "Electronic Signature Policy" for the entire County. This opened the door to enabling any agency to use DocuSign for any internal or external document. In fact, departments are now encouraged to use DocuSign for electronic signatures where possible, so Howard Hill, Information Technology Manager at Alameda County, expects the use-cases to grow throughout the county.

In addition to expanding use-cases, Alameda County is adopting Salesforce and will be customizing DocuSign for Salesforce (DFS) to meet its needs to send contracts for eSignature. Additionally, they are looking into incorporating DocuSign Payments into existing processes where Alameda County collects payments and fees, such as with its assessment appeals (mentioned above).

Perhaps oddly enough, one of the challenges facing the IT Technology Department in the wake of the new eSignature mandate is the outreach to all 21 departments in Alameda County to educate them on the plethora of possibilities that DocuSign affords them. Alameda County ITD has achieved such groundbreaking innovation in the way it designed its DocuSign integration that some of the new use-cases will be easy to implement. Other use-cases will be more complex, but the key now is to generate awareness throughout the county as to the possibilities.