Who needed coffee? Well, almost everyone. After the fun from the first night’s concert with Michael Franti & Spearhead – which capped off an already exciting Momentum Day 1 – more than a few folks needed an extra jolt to get going yesterday. But no fear, we had the caffeine needed for the mission, and then it was off to the races once again. 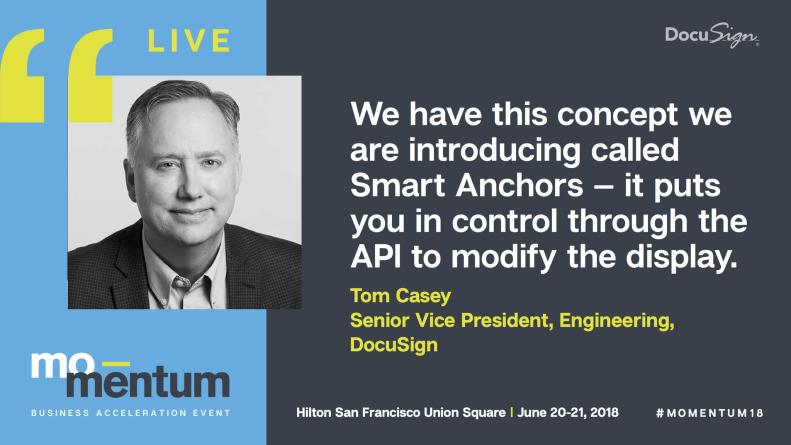 System of Agreement for Developers

There are currently 86K+ developers on the DocuSign platform. 60% of DocuSign transactions run through the API and we’ve seen a 250% growth in API transactions in the last two years. As our CEO, Dan Springer, said yesterday, “Whether you realize it or not, you (your company) have a system of agreement.” The modern System of Agreement consists of four stages: Prepare, Sign, Act, and Manage, and we’ve made sure to cater the experience for developers. 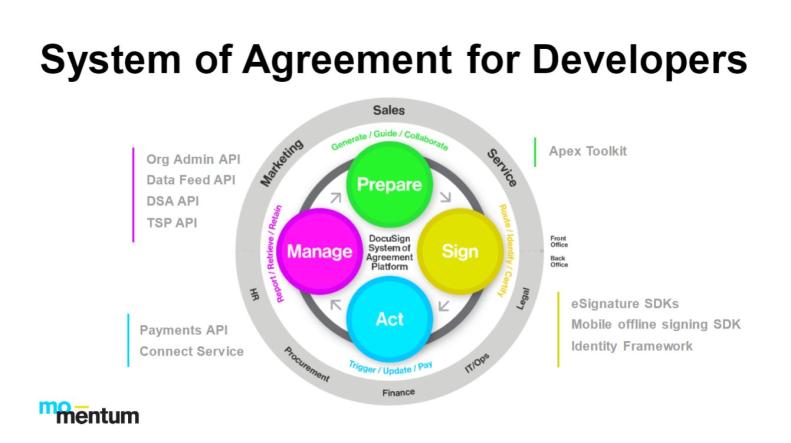 Coming this fall, the Apex Toolkit will support a custom UX for envelope preparation, sending, and signing. Additionally, it abstracts DocuSign administration and API; enables process automation; extends to Service Cloud, Communities, etc.; and is aware of Salesforce platform considerations and leverages your existing sending customizations. Between now and release time, if you have any questions or want updates, feel free to send us a message at our Twitter handle, @DocuSignAPI. 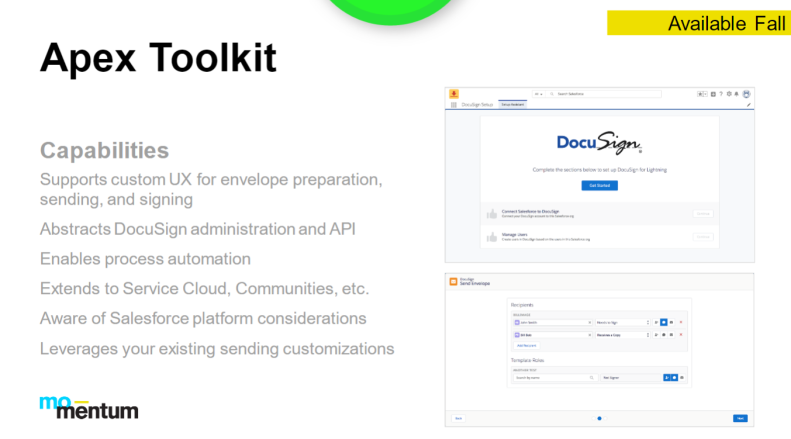 With a Beta coming this July, the Organization Management API is intended to help our developers and customers gain user insight, meet compliance requirements, and deliver management at scale. It will enable you to automate user provisioning and auto-activate memberships. For additional inquiries on this, send us a tweet, or email us at OrgAdminBeta@DocuSign.com.

Coming this July, the new Data Feed API enables you to extract data from DocuSign and load it into your own data warehouse to report and analyze using any tool of your choice. We’ll have content available in our Developer Center to show you how to use this new API, which was created based on feedback from our customers. 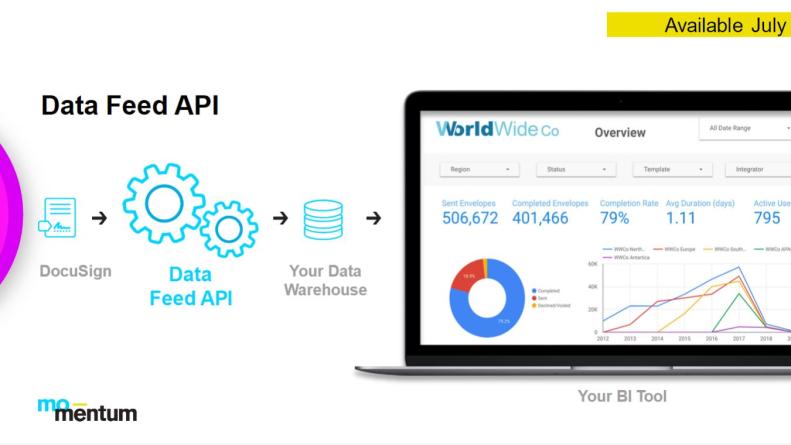 On track to be delivered to you this fall, Responsive Signing & Smart Sections will enable you to achieve higher completion rates, improve performance, and simplify the signing experience. Responsive signing automatically adjusts the font size and layout of your documents for the best readability on any device in any orientation. It does this by converting PDF documents into HTML on the fly, which also yields high performance, especially on a mobile devices. 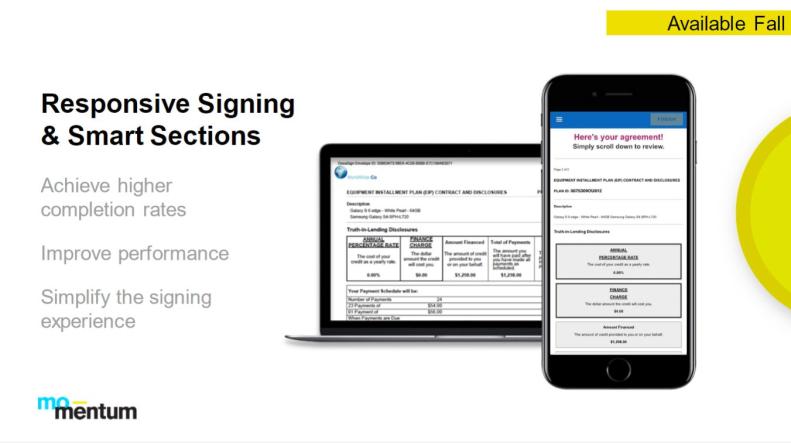 Smart sections take responsive signing to the next level by enabling you to define collapsible sections, page breaks, and other formatting options. This is especially useful for long or complex documents.

Like yesterday, we had a full day of developer-focused sessions, with some geared toward those just starting out with DocuSign to those who are experts in the field and everyone in between. Below are some of the highlights, and right here you can find and download all of the session content.

This intermediate-level session was led by Gil Vincent, a Technical Architect with DocuSign for nearly 10 years. Gil helped session attendees solve the need to tie envelope transactions into back-office systems. He taught the optimal ways to combine the DocuSign Connect service, Connect configurations, asynchronous processing, and API for building-out a reliable and scalable solution architecture for integrating envelope transactions with out-of-band operations. 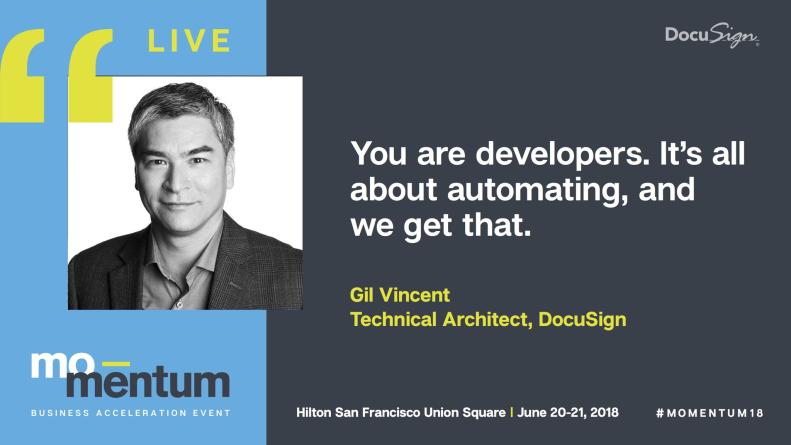 How Procore Built a World-Class Integration using the DocuSign API in Under 48 Hours – and How You Can Too!

We’re always fortunate to have partners join us at Momentum to tell their story first-hand. That’s why we were thrilled when Nyasha Harmony Gutsa joined us once more to tell the Procore + DocuSign story and how they’ve evolved their integration.

The quick backstory: Procore is the world’s most widely used construction management software. Before they used DocuSign, agreements with sub-contractors could take up to two weeks to be received and completed. For some projects, there’d be 30 sub-contractors, with agreements going out at varying times due to backlogs, so one can imagine the delays that occurred as a result. In some cases, Nyasha said there were customers who had so much paperwork that was required for their projects they were actually running out of storage space for all of the physical documents. The key issues here, among other things, were wasted time, money, and space.

When it was time to integrate, it took just one Procore developer only 48 hours to add DocuSign into Procore. When it comes to getting agreements signed and fully completed, what used to take weeks turned into minutes; what last year took minutes, now only takes seconds.

This year, Momentum has been pretty honored to have some awesome speakers on-hand. For yesterday’s keynote lunch, we were joined by the CEO and Co-Founder of Life is Good, Bert Jacobs. Along with sharing his personal and professional journey, he shared a story of inspiration and optimism, with the persisting notion of living life to its fullest and maintaining a positive outlook on life, no matter the hurdles. Two stories stuck out. The first was on twin boys who at 10 years old wrote to Bert about the constraints they’ve endured since birth. One brother is blind, while the other had to have his right leg amputated, both of which were caused by premature births. As children, they wrote to Bert with enthusiasm for his projects and to share their appreciation. Another story came from a girl named Lindsey, who at 10 years old was diagnosed with cancer. Bert has maintained a close relationship with her, and we’re thrilled to say she’s been in remission for 20 years, and now Lindsey is doing amazingly, owes a spot of her optimism to Life is Good, and even made a surprise appearance yesterday at Momentum!

As part of his moving stories, Bert had a few memorable one-liners. Here are our top 4:

To officially close out Momentum 2018, we featured an inspiring group of speakers:

Dan Springer opened the keynote by quickly bringing out two-time NBA champion JaVale McGee of the Golden State Warriors. A common thread between his work on the Warriors and our work at DocuSign: teamwork. On top of that, JaVale stressed the importance of sacrifice. He says sacrifice along with having a team of people knowing what they need to do to get the job done and willing to do it for the greater good is key to success.

JaVale then shared his interest in technology, and a pretty neat story about the one time he was at a tech conference in Utah. While there, his very first contract to play for the Warriors came through. How did it come through? With DocuSign, of course.

He then was joined on the stage by his business partner, Kez Reed, and the duo shared the vision and mission of their charity: JUGLIFE Foundation. Its mission to help everyone understand how critical water is to life and lifestyle.

JaVale was followed on-stage by Marie Huwe, who proudly featured our developer programs and initiatives for the Momentum audience. Joining her for a three-person panel was Dr. Nan Boden of Google and Heather Conklin of Salesforce. We were proud to celebrate the eight-year partnership with Google and ten-year partnership with Salesforce, both of which are still going strong and working with us to innovate further. Case in point, our DocuSign for Salesforce CPQ announcement from yesterday, which you can read more about here.

And if you didn’t already know, these two great partners were the sponsors for this year’s Momentum Hackathon. “There are so many points on innovation, that it was a no-brainer to work together on the developer hackathon,” said Marie. She then took us through the hackathon winners, from four categories: Better Together: DocuSign and Google; Better Together: DocuSign and Salesforce; Hack for Good: City Year; and Best of Show. All four winners innovated brilliantly, and with amazing benefits for society. You can get all the details on the winners and their submissions here. 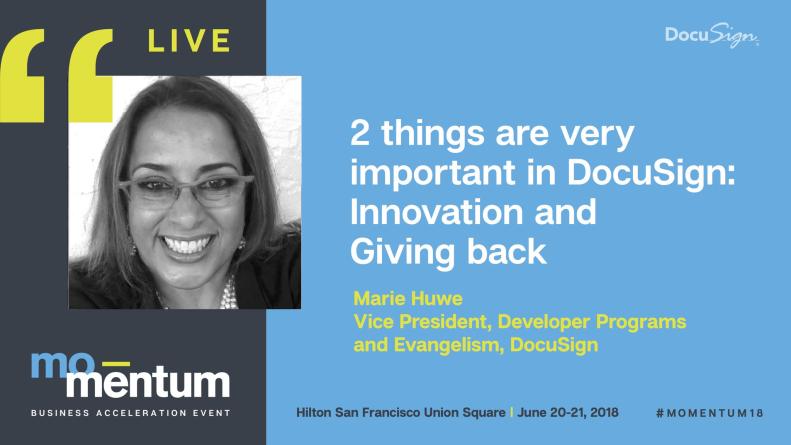 Following this, three student success coaches from City Year took to the stage to share their stories of tutoring and mentoring three students: Glenn, Armando, and Ashanae. “After eight months of working together, Glenn has grown so much. He went from failing to getting all As, Bs, and just one C,” said one City Year member.

Back on the stage was Marie, who was joined by the CEO and Co-Founder of City Year, Michael Brown, who says that nothing inspires him more than working with young people. Interestingly but not surprisingly, he started City Year when he himself was young: it began with his college roommate in their dorm room. On the passion behind City Year, Michael said, “If you don’t graduate from high school, it’s really a fast track to the underclass.” This leads to higher rates of poverty, incarceration, and so forth, which is the impetus to work with students early and strategically. City Year works hard with its hundreds of volunteers to boost graduation numbers and provide a helping hand to those who need it most. It was great partnering with City Year for the hackathon to give back to such a deserving organization, and to try to make the lives of its employees and member families a little easier. 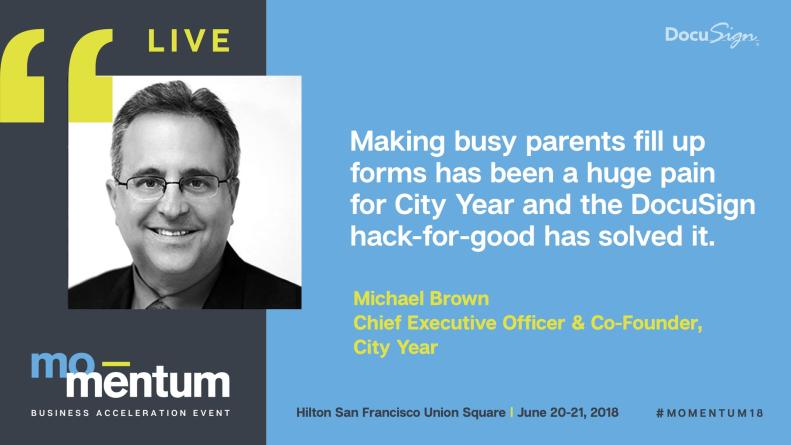 And finally, a little note on the donations received during yesterday's keynote lunch with Bert Jacobs. Life is Good books and shirts were on sale to conference attendees, and Bert let the crowd know that for every dollar spent by attendees, DocuSign would match that amount, with the money going to the Life is Good Kids Foundation. Well, interestingly, that was news to DocuSign, as Bert went a little rogue on us. A good salesman though, huh? With that said, our CEO wasn’t going to let anyone down, and announced that he personally would match the dollars spent yesterday. In total, Momentum 2018 attendees put $40,000 toward Life is Good, bringing the grand total to an amazing $80,000.

We want to thank all our developers, partners, and customers who attended and shared in these two fantastic days with DocuSign.

As always, be sure to check out these resources for complete information and continual updates: