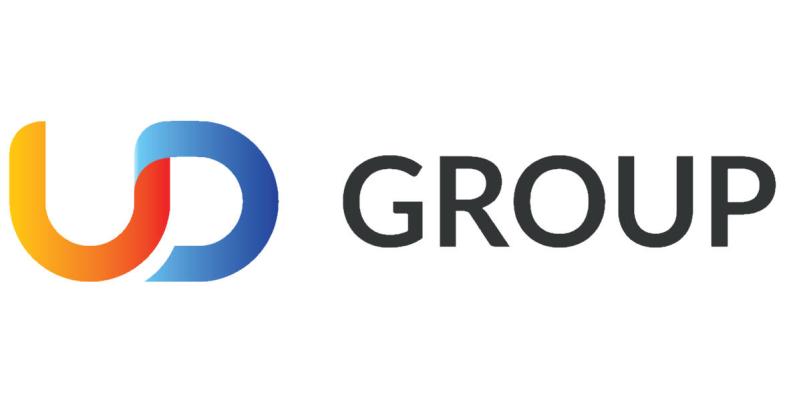 UD Group is an energy and utility software solutions provider. They are based in Manchester, UK, but serve an international client base, with solutions for suppliers, asset managers, and energy brokers. Their UD Platform, shown in Figure 1, enables energy brokers and suppliers to create automated quotes and contracts—with internal compliance verification—and send those contracts for signing with DocuSign, and simplify the entire quote-to-contract journey for both the energy and utility sectors. The portal also provides real-time quotations and pricing across the entire supply market and enables custom B2B energy price comparisons. UD Group also has a cloud-based CRM feature for the energy and utilities markets which enables their clients to automate and track all customer communications, generate those automated quotes and supply contracts, and get them signed digitally via DocuSign.

Leading the way in the UK

UD Group is one of the first organizations in the UK to build on the DocuSign eSignature API. In fact, they are a completely API-driven company, which has enabled them to build very differentiated technology solutions that are both extensible and flexible. UD Group started as an energy broker with a vision—which turned them into a technology company. With just one developer, they first built an energy-specific CRM system which included their pricing, and then they integrated the DocuSign API so that a broker could create a quote and get their contracts all signed digitally. This turned into a commercial product that is used by most of the largest energy brokers in the UK. In fact, Bob Cunningham, IT Innovation & Software Director at UD Group, says, “Because we built in the DocuSign API, we can go from collecting the quote all the way to signing up the customer. And be first in our industry to do that.”

Because UD Group was such an early DocuSign adopter in the UK, only one energy supplier, British Gas, used DocuSign. Part of the success of UD Group’s technology solutions required that they encourage all the other suppliers to adopt DocuSign as well. UD Group works with all energy suppliers on some level, but then developed software that includes DocuSign as a standard. This has now been adopted by the majority in the Third-Party Intermediary (TPI) market and 15 energy suppliers, including a number of “the big six.” This enables UD Group’s brokers to get instant quotes online, send electronic contracts, see the status, and manage the quotes. 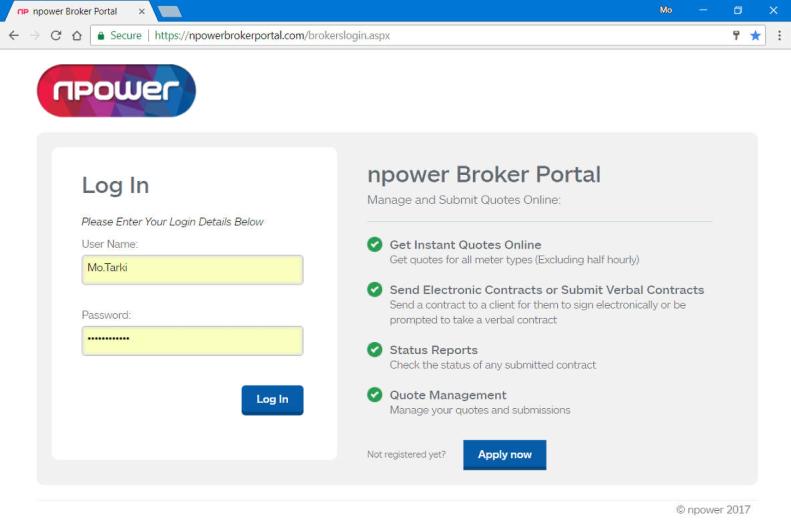 Prior to integrating the DocuSign API, UD Group’s energy brokers would have to physically visit customers, or record their orders over the phone, both of which are very resource-intensive and fraught with compliance issues. As shown in Figure 2, DocuSign is integrated into the UD Platform, making it simple to create digital contracts with eSignature capabilities. 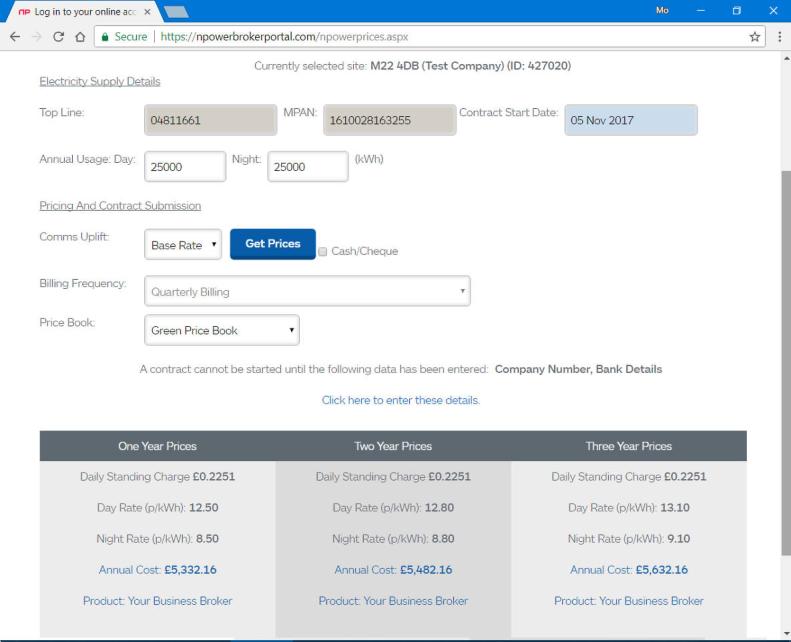 The big bonus with DocuSign, per Paul Hodnett, founder of UD Group, came from a resource perspective on the supplier side, the significant improvement in compliance, and also the speed that TPIs can navigate between processes and contract status at the click of a button. In fact, DocuSign is a key selling point for their whole solution, and a big factor is compliance.

One of the things the brokers using the UD Platform don’t need to know, but benefit from, is that each major component is API-based. In the UD Platform, brokers can perform a national grid lookup, build out the quotation, create their prices, and put together the contract—and each step is part of UD Group’s API. This is their aim and their philosophy: everything they build is API-driven. They even wrapped the DocuSign SOAP API into their own API, effectively creating their own Software Development Kit (SDK). The UD Group development team, which has grown to more than 30 engineers, created their own underlying assemblies for the DocuSign API and then created a layer on top. This enables them to go from collecting the quote all the way to signing up the customers, and be the first company of their kind to do that digitally in the UK. From a programming perspective, everything is built with C# and .NET, and their cloud storage is mainly Microsoft Azure. The net result of this great development effort is a contract being sent automatically using the DocuSign eSignature API, as shown in Figure 3. 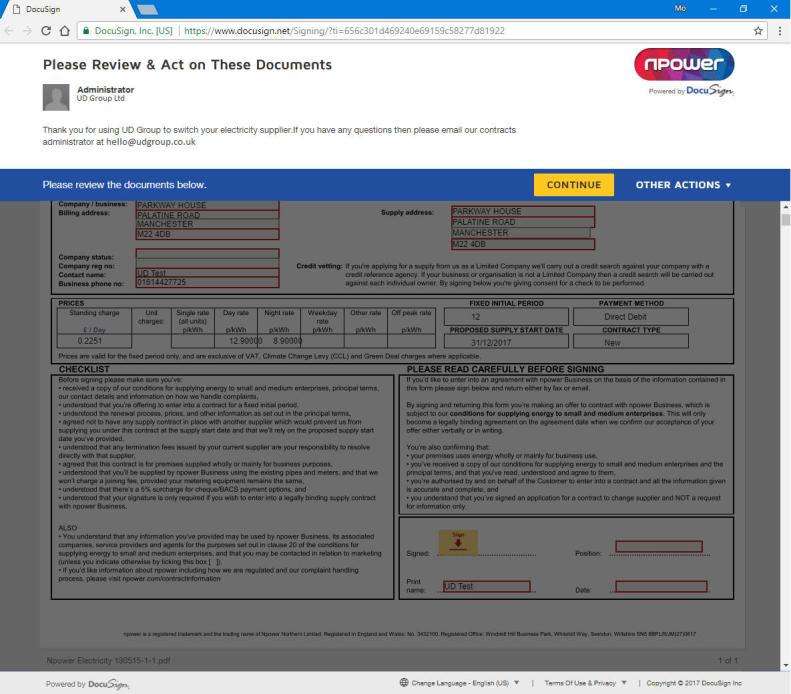 Figure 3: Sending a contract for signing via DocuSign from within the UD Platform transaction feature

Purpose-built Cloud CRM feature for the energy and utilities industry

UD Group discovered very early on that they needed a specific CRM solution for their industry. Their UD Platform CRM feature is used by brokers to sell contracts and also integrates the DocuSign API. Within the CRM solution a broker can choose to sell not just one supplier; in fact, they can do a full comparison with a national grid look up (API-based, naturally). The broker chooses which suppliers to include and then the system shows them what they want to offer in contract, which is illustrated in Figure 4. 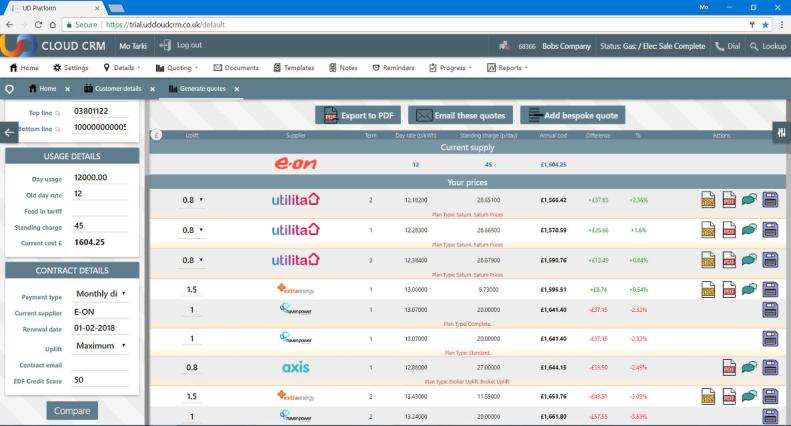 The UD Platform CRM feature is fully white-labeled for energy brokers. And, for those customers with Salesforce or Microsoft Dynamics, UD Group offers a plug-in. Again, this is possible because everything at UD Group is API-based.

Brokers can also create their own custom contract workflow from within the UD Platform CRM feature. Per Nathan Wright, Director of Channel Sales at UD Group, “DocuSign is the icing on the cake.” This is shown in Figure 5. 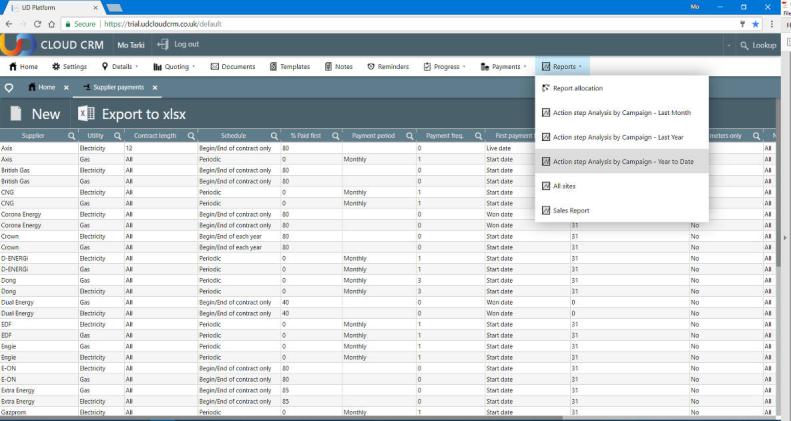 Performing database lookups and supplying field values to the DocuSign eSignature API results in legal contracts being generated and sent electronically, such as the Contract Offer for the Supply of Electricity shown in Figure 6. 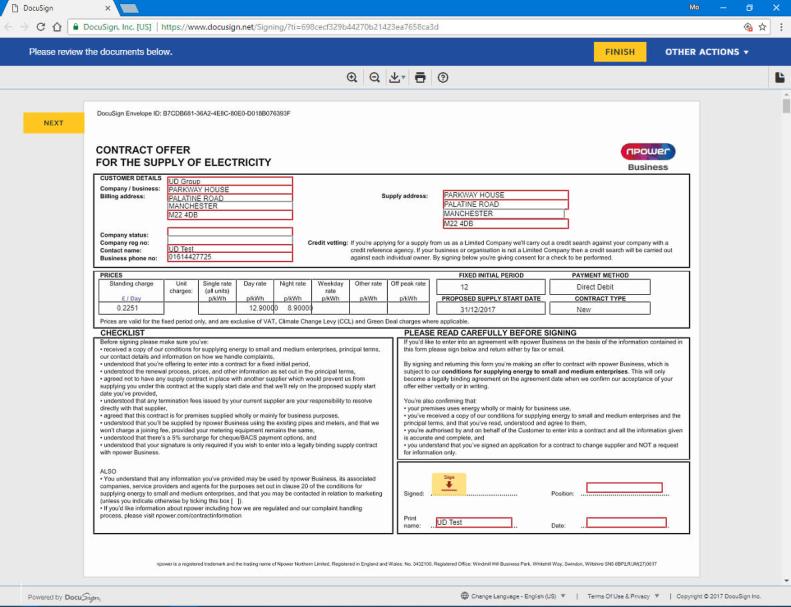 Building up a full head of steam

In the manner of a true technology company, UD Group is not standing still. They are in the process of building a new API, and as part of that, will be evaluating the DocuSign eSignature REST API. UD Group’s Head of Product and Marketing, Mo Tarki, says, “As part of our overall business strategy, we are growing and evolving into the US Market. UD Group is introducing DocuSign with new suppliers, as a number of suppliers have not yet adopted this solution. Currently 15 suppliers have now all embraced DocuSign and we are integrating and evaluating DocuSign Payments into our solutions.”