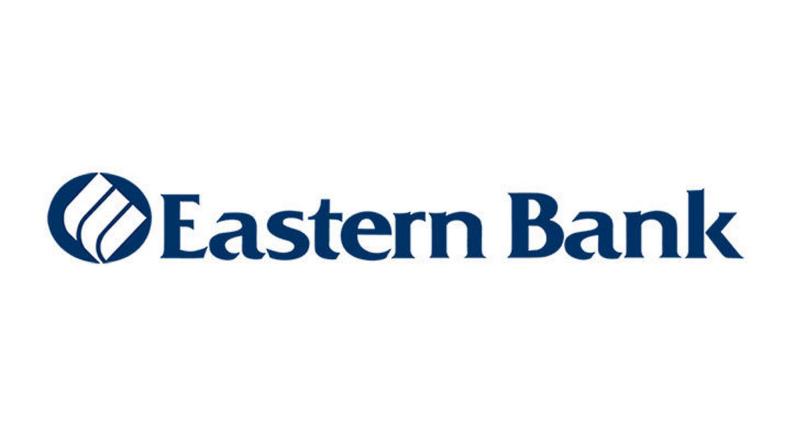 Eastern Bank has been in business for 198 years. In fact, it is the oldest mutual bank in the United States. Banking is a traditionally conservative industry – resistant to change. However, customer expectations of quick service and immediate decisions led the Board and executive management team at Eastern Bank to abandon ‘business as usual’ for an industry-leading approach.

To execute the board’s vision, Eastern Labs identified the key elements of a digital strategy and developed a plan to prototype, test, and integrate rapidly. Eastern Labs determined that paperwork was a major source of friction for most banking products. In fact, a small business loan could take up to three weeks to close – putting that SMB customer’s plans and success on hold. The first priority for Eastern Labs was to identify the market leader in the Digital Transaction Management (DTM) space and to integrate eSignature capability into all software products it builds moving forward. That market leader was DocuSign.

Off to the Races

After realizing that eSignatures had to be implemented to alleviate paperwork friction, Eastern Bank embarked on an aggressive mission to pilot a program that offered loans to a select group of its existing small business clients. Their approach was rather unconventional in the banking industry. Instead of relying on existing lending processes (that resulted in unnecessary friction), they realized that for a truly innovative solution they needed to be bold and solicit input from actual customers along the way to ensure its adoption. Piloting a limited and targeted program in this fashion enabled Eastern Bank to minimize risk, while analyzing if the program would succeed and identifying opportunities to optimize the program for success.

Before beginning the application and infrastructure design process, Eastern Labs had to fulfill one important prerequisite – to think out-of-the-box. After all, the goal was to challenge the typical bank loan process and to eliminate friction. The first thing Eastern Labs did was focus on simplicity. In other words, Eastern Labs did not want to design an overly-complex process, but still had to conform to rules, regulations, bank policies, and customer privacy practices.

All aspects of the Eastern Labs solution would be focused on the customer and the positive perception towards ease of use and Eastern Bank itself. Not only did Eastern Labs develop a solution that conforms to all design tenets described earlier, but they dramatically enhanced customer perception in an unprecedented way. Since the ultimate solution was completely automated, as soon as all documents were eSigned and flagged as complete, Eastern Bank decided to fund the loans by immediately transferring the money into the borrower’s account (typically within three minutes). Therefore, the goal of the entire process was to take less than five minutes, including the loan application, approval, document eSignature, and immediate funding of up to $100,000.

Eastern Labs selected DocuSign due to a variety of factors, including:

For the small business loan pilot program, Eastern Banks sent an invitation email to specific small business customers. The customer would click the link in the email, which brought up the web page shown in Figure 1.

Figure 1: Beginning the application process by clicking the link in the invitation email.

Clicking the Apply Now & Get Your Loan button began the simple, two-minute process of applying for the small business loan. The customer would answer the five basic questions shown in Figure 2, then clicks the APPLY button. 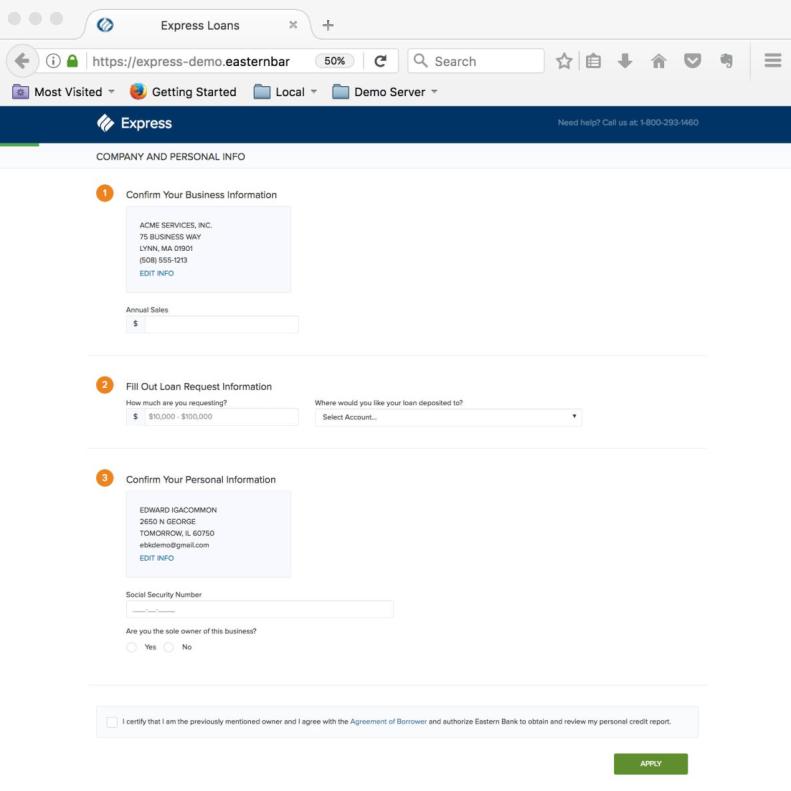 In less than 30 seconds, the small business customer would have a decision on the loan application. During this timeframe, the solution created by Eastern Labs accessed the applicant’s personal credit, Dun and Bradstreet business report, banking history, and more. The algorithm processed these data points and computed a risk profile. If the risk profile is low, the applicant is approved for the loan and sees the message shown in Figure 3. The algorithm was even smart enough to route the approved loan through a Small Business Administration (SBA) guarantee program in certain situations. 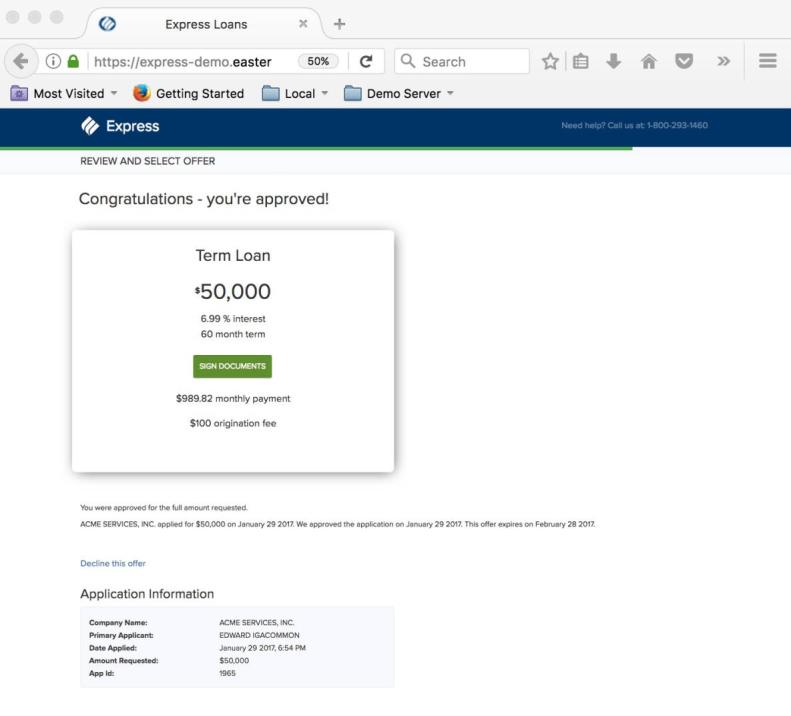 If necessary, Eastern Labs’ algorithm would attempt to compute a counter-offer for a lower loan value that conformed to an acceptable level of risk. In either case, if the applicant found the offer acceptable, clicking the Sign Documents button began the DocuSign eSignature process to review the loan documents and officially accept the offer, as shown in Figure 4. 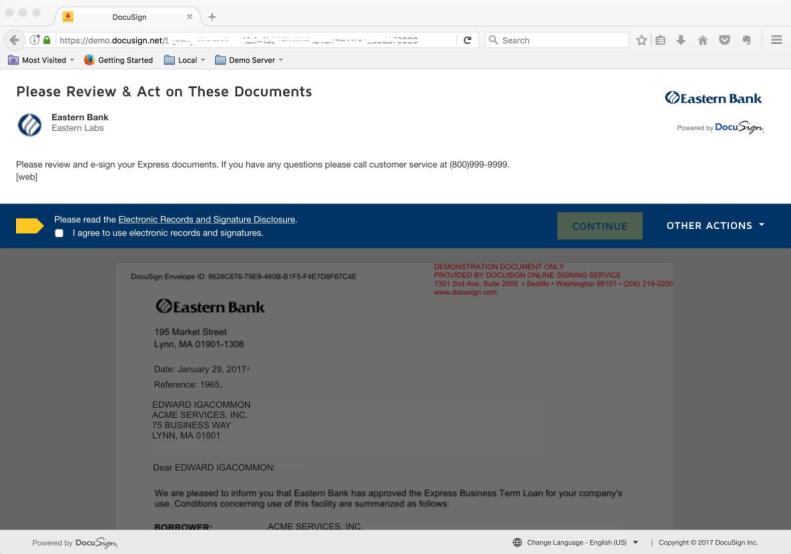 Figure 4: Reviewing and signing DocuSign documents after a loan offer.

To incorporate the eSignature process, Eastern Labs implemented the DocuSign eSignature REST API. Laurence Stock, Senior Vice President and co-founder of Eastern Labs, created the initial DocuSign Proof of Concept in a single afternoon. Since then, the team has grown to twelve enterprise developers and they created their full enterprise-grade solution over the course of six months in late 2015. They used the Python how-tos provided by DocuSign to jumpstart their development efforts, and they even asked a couple of questions in the Stack Overflow forums. From the outset, Eastern Labs didn’t want to customize the standard DocuSign experience from an end-user perspective. Instead they wanted to keep the Out-of-the-Box Experience (OOBE) so that customers who have already used DocuSign would be familiar with the process. Eastern Labs developed their solution to use DocuSign templates to dynamically create composite envelopes to support loan documents for different loan types and number of applicants.

One major decision point was to determine how to check the status of DocuSign envelopes, and how to determine if something went wrong during the loan application process (such as a user closing the web browser in the middle of a signing session). One potential option was to use DocuSign webhooks. However, due to strict regulations, Eastern Bank is locked-down and cannot accept incoming webhook messages. Therefore, Eastern Labs came up with an innovative way to determine the status of envelopes by appending parameters to the URL (the details of which are proprietary). For any envelope whose status is not complete, Eastern Labs wrote code that uses standard DocuSign status polling every 15 minutes. This enabled Eastern Bank to learn if some adverse condition took place during the signing process that prevented the signing of the documents. If something did occur, the system automatically emails bankers so the problem can be addressed immediately.

After the documents are DocuSigned, they are stored permanently in a repository within Eastern Bank, but they are also available to customers using their own DocuSign account (which they can create for free if they don’t already have one).

Eastern Bank considers the pilot program to be incredibly successful – in fact – game changing. When they embarked on this mission, they didn’t know if customers would be receptive to a fully-digital process for loan applications. The thinking was that Eastern Labs would alter their solution, if necessary, based on negative feedback. They found that customer acceptance was very high. So high, in fact, that after completing thousands of loans, there was only a single negative comment about the eSignature process. Additionally, the completion rate of documents was near 100%.

Eastern Bank’s approach to starting a controlled pilot program, learning from customer feedback, and gradually expanding the program, has been critical to its DTM success. The pilot started as an online-only program, offered to small business customers. With the pilot’s success, Eastern Bank expanded the experience to be available inside a small number of bank branches. It then added more complex use-cases, such as SBA loans, followed by the complete rollout to all physical branches.

Building on these highly-successful pilot programs that have resulted in many referrals and repeat customers, Eastern Bank has plans to leverage the new application infrastructure to rollout other products throughout the bank. Bankers are now able to take “the show on the road” to customer locations or convenient meeting places, armed with iPads loaded with their successful API-integrated software.

Eastern Bank has built a solid application infrastructure that is scalable to additional products, so they can, once-again, think out-of-the-box to challenge traditional lending practices. They are also working on data mining models to proactively understand customer growth to offer tailored products to them, all of which will be offered digitally using DocuSign’s eSignature API.