This weekend a team of DocuSign engineers and developers made their way to the University of Pennsylvania for the annual PennApps hackathon. Excited to be a sponsor this year, they traveled to Philadelphia from San Francisco and Seattle to mentor teams of high school and college students on their DocuSign-focused projects at what became the nation’s first student-run hackathon back in 2009 when it was established.

The challenge we put forth was simple: create the best solution for the DocuSign eSignature API. We wanted hackers to have plenty of room to be creative, but urged them to be thoughtful, as the grand prize this year was something to be sought after. The winner walked away with $2,000.00 and a lot more (read on below for full prize details). Second place took home a cool $1,000.00.

Before we get to the winning submissions, let’s roll back a little to the first night.

Registration began on Friday evening and quickly there was a crowd at the DocuSign table. The interest in our API was primarily the reason, but we have a hunch the grand prize and the fashionable DocuSign socks also played a role. After a while, it was on to the opening ceremony, where Vijay R. Kumar, Dean, Penn Engineering, provided the opening remarks. Dean Kumar spoke of many important things, including the rise of numerous tech platforms and innovations in 2009 following the financial collapse and diversity in tech. Perhaps the most exciting item from his remarks was the noteworthy and important inclusion that this year, for the first time, PennApps is being run by two women, which we think is awesome.

Students were off to the races following the opening ceremonies, with many outstanding ideas, ranging from a way to expedite prescription pick-ups at pharmacy drive-thrus, incorporating pre-verification, DocuSign Payments, and QR codes; to a pitch that would use facial recognition and GPS for a black box effect to upload crash conditions via DocuSign in the event of an automobile accident.

After some brainstorming and early work by PennApps hackers, Naveen Gopala, Manager, Engineering, provided an in-depth DocuSign API tech talk to the hackers to ensure they got off on the right foot. He introduced DocuSign and the eSignature API to a packed room of high school and college students who were either unaware or more commonly, unfamiliar, with our API. But no fear, Naveen showed them how to get started using it, walking them through many of the features they could include and customize and the components they would need to thoughtfully consider early on.

For the next 30+ hours, the hackers went to town on their projects, with the majority coding in Node.js. Our mentors stayed onsite until late on Friday evening, were there bright and early Saturday morning, and stuck around until 2:00am Sunday morning to ensure they had all their questions answered and all the help they needed.

Important note: all of the hacking was interrupted mid-day on Saturday by a bunch of corgis, including one that did this fun trick.

As we said, our mentors went back to their hotels at 2:00am on Sunday morning, only to return just six hours later at 8:00am when the hacking came to an end and the judging began. After nearly 40 hours of work time allotted to the students, it was time to see what they had put together. Our judging began in the expo halls and was done in two waves, conducted by the following individuals from DocuSign:

After hearing about and seeing each of the DocuSign API submissions in action, it was time for the judges to deliberate. The entries were pared down to the top 10 based on the below four criterion, and with additional scrutiny once the top 10 finalists were determined.

So, at this point the stage is set and we’re on to the closing ceremony to announce the winners.

Too often, a doctor with poor handwriting writes a prescription that subsequently gets filled incorrectly, with the incorrect medicine, dosage, etc. being applied. Also too frequent are the instances of prescription pads being lost or stolen and being improperly used. With these issues in mind, DocuMed automated the process of prescribing prescription medications using advanced DocuSign API features, including event notifications, recipient review, verification, and more. The finished product impressively took the form of one mobile app and two console apps.

The team consisted of five members (four pictured below) from two universities:

In first place was team CacheTheHeat, who faced the issue of home and building fires head on. What they noticed is that up to this point, the prevention of fires isn’t “smart,” per se.

Their project used image processing and machine learning along with DocuSign to speed up capturing and analyzing fires, plus notifying the relevant parties via DocuSign. These could be a local fire department or the property owner’s insurance provider. Users sign an authorization form with two-factor authentication and DocuSign Payments to get started in their app.

PennApps was one of the best hackathons we’ve attended! The brilliance behind the ideas, workarounds, creativity, and technical difficulty of the hacks we saw this weekend – in all categories – was remarkable. We can’t wait to go back. Happy hacking!

As always, we invite you to check out our many other resources: 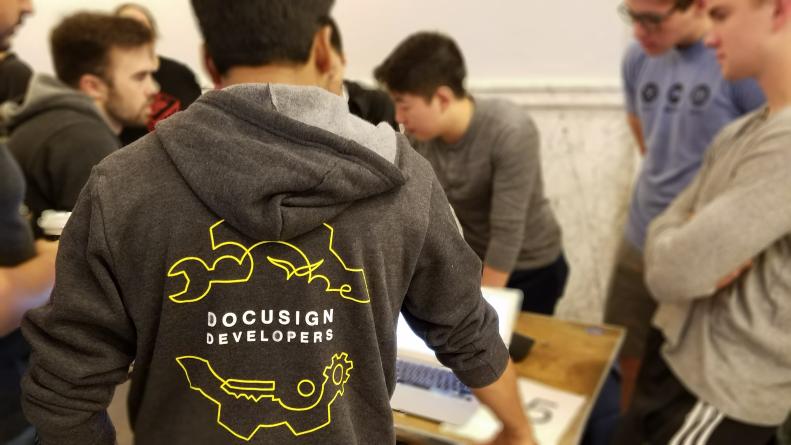