Imagine you or your family has been affected by a natural disaster – an earthquake, tornado or flood. Your home is damaged or destroyed. Your family is displaced. You need immediate help, supplies and maybe even medical attention. Where will you turn?

Enter Team Rubicon – an organization that unites the skills and experiences of military veterans with first responders to rapidly deploy emergency response teams. With over 35,000 volunteers – many of whom are highly-trained vets and medical professionals – Team Rubicon can respond to disasters nationwide or, indeed, worldwide.

Amid the pressure and uncertainty in disaster relief situations like these, technology can play a vital role. This is especially true for Team Rubicon’s field operations, where most workers are using mobile devices, often with little or no Internet connectivity. And that’s what we were looking to explore in more depth at this year’s DocuSign MOMENTUM ’16 conference with our Hack-for-Good, alongside Deloitte Digital, and for Team Rubicon.

So what’s the problem?

Among the many operational challenges that Team Rubicon faces, one of the most prevalent is how paper-intensive its processes are.

The operational workflow includes two major categories of paper forms: Waiver Processes and Membership/Field Operations Processes. Each of these requires signatures for consent and authorization – such as those required by volunteers to acknowledge dangerous duty, homeowners for the demolition of their damaged home, and countless other situations and scenarios that take place in mobile and rugged environments.

Having this important information only recorded on paper is far from optimal. Paper can get lost, rendered unreadable or destroyed in a disaster situation. It’s tough to easily-determine who has signed agreements and who has not, or even whether all signatures have been obtained. And all of this is done manually, taking time – the one thing you don’t have in disaster response. 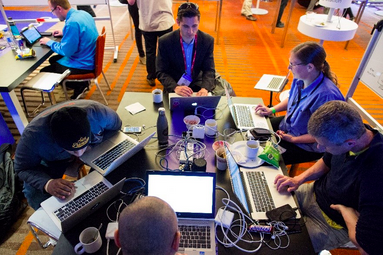 On stage at DocuSign MOMENTUM ’16 in San Francisco on April 7 this year, Jake Wood – the CEO of Team Rubicon – stated it pretty clearly:

“Our veterans are coming out of the most technologically-enhanced military in the history of the world. When they join Team Rubicon and we send them out into disaster situations, they look at us and ask why they can’t have the same technological capability. Over the course of the last six years, Team Rubicon has been working hand-in-hand with companies in Silicon Valley to help improve disaster response. ” 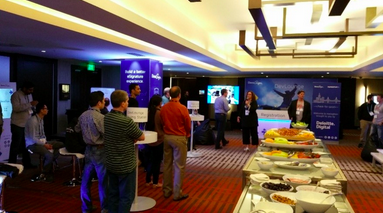 That’s why we reached out to the regional developer community and invited them to lend their coding expertise in the aforementioned Hack-for-Good. Using DocuSign’s expert social media team – along with Team Rubicon and our grand-prize sponsor Deloitte Digital – upwards of 50 developers participated. The profile ranged from enthusiast to professional, from small and large companies alike, and even involved a team with members as far away as Russia.

At 9am on April 6, we challenged the developers to create a compelling solution using the DocuSign eSignature API (and with support from DocuSign engineers and Team Rubicon operations experts) that helped Team Rubicon with its core field mission. And this all had to be done before 1pm the next day! 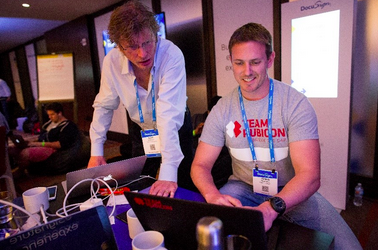 In real time, Jonas Reynolds, Region VIII Administrator for Team Rubicon was able to work with each individual team to help them understand the operational challenges they faced and provide guidance for the solutions developed by the teams. In addition, Amazon participated with an Echo evangelist to offer teams the option of voice input for their solutions. Other SaaS providers in Silicon Valley got wind of the event and came to observe – they even pitched in when things got super-busy. 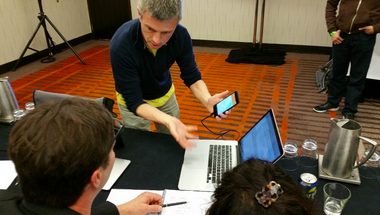 At 1pm on April 7, coding stopped and the judging process began.

Of the 12 teams, six advanced to the judging phase, and four then advanced as finalists. The judges were tasked with selecting the best mobile solution as well as the grand-prize winner.

One-by-one, teams entered a closed room and presented their solutions to the judges – including Team Rubicon CTO, Steve Hunt, and ProgrammableWeb editor, Wendell Santos. Each team discussed the solution they created and how it was designed to benefit Team Rubicon.

Team InDepth consisted of four members who developed a solution that will allow Team Rubicon to more effectively track and manage teams during an engagement, and to improve communications between teams in the field and the command center.

Team InDepth came up with a great working prototype for both mobile and web-based devices. It allows an administrator to login and manage field team members and to map their locations. 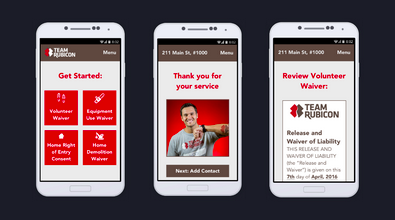 With three members, Team Caesar tackled a challenge that Team Rubicon had outlined around waivers in the field.

With only 20% of waivers being readily available, Team Caesar chose to streamline the signing process and provide a way for operation leaders to quickly determine if the correct waivers have been collected at a given site. The team developed an app for Android/iOS that included the four major waiver forms (volunteer, equipment, home entry, and home demolition) in an easy-to-use e-Signature process, along with an intuitive navigation overview/filter for operation leaders. 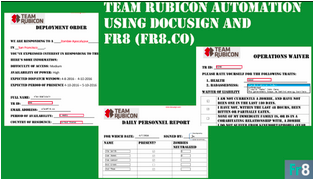 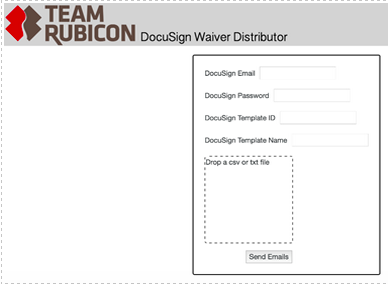 With five team members, Team Gilsons decided to help Team Rubicon streamline the way volunteers are mobilized. They focused on eliminating the manual process of emailing waiver documents to each volunteer. After developing the solution in the Hack-for-Good, Team Rubicon can now upload a list of volunteers and identify the DocuSign waiver template they would like to email and their app will programmatically send the waiver to all volunteers listed.

And the winner is …

During the closing keynote of the DocuSign MOMENTUM ’16 conference, winners of the Hack-for-Good were announced. 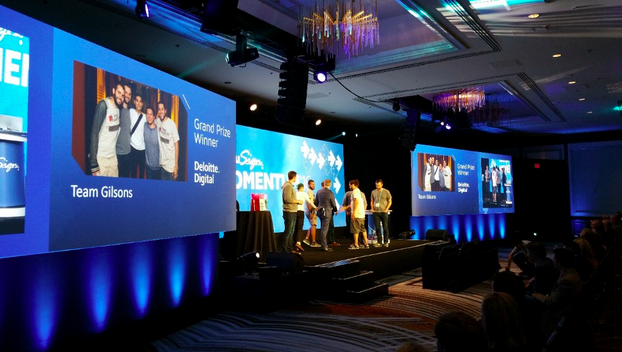 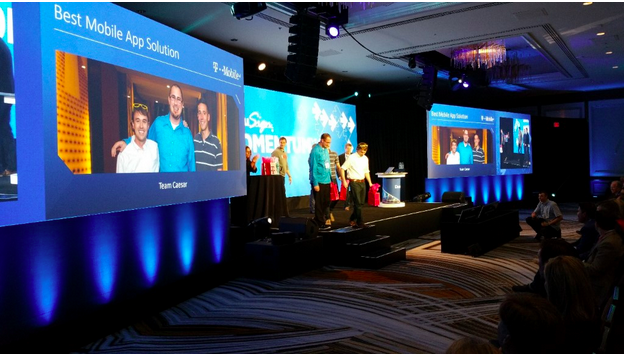 The Hack-for-Good produced some incredible prototypes that could help Team Rubicon in the field --- the challenge now is to build them out, stress-test them and start looking at the reality of getting them into production.

Look out for future updates in this compelling story of the intersection of technology and social good. And next time we’ll talk more open source nature of this project, and the fact that the code will be available to over 40 disaster relief organizations that we are committed to supporting in partnership with the Clinton Global Initiative (CGI).

Want to see more from Hack-for-Good? Check out the video below: