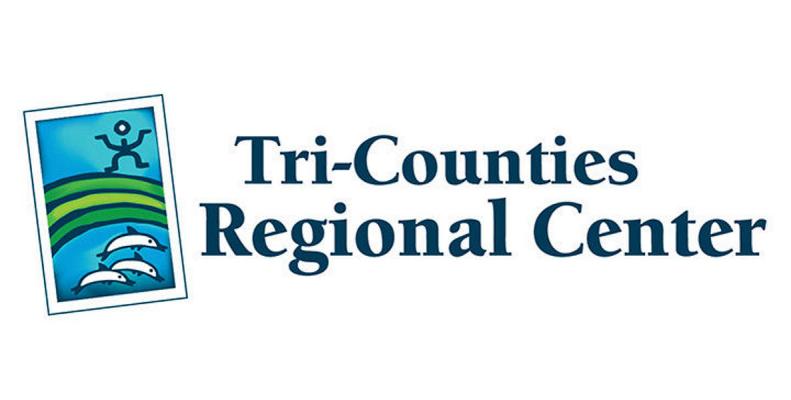 Tri-Counties Regional Center (TCRC) provides support and services for individuals with developmental disabilities living in three counties of California: San Luis Obispo, Santa Barbara, and Ventura Counties. TCRC’s services are essential to those with disabilities so that they may live full and safe lives as independent members of the community.

Being a government agency, TCRC requires much paperwork – namely a Medicaid application/certification/recertification/performance monitoring process quarterly and every year for each of the approximately 5,000 people in the program. In fact, some of the participants are not physically able to sign their name using traditional paper methods, but can certainly use DocuSign – with its leading accessibility features – to electronically sign documents, as depicted in this powerful and moving video.

After selecting DocuSign, Box, and Canon as key business partners, Tri-Counties Regional Center found it could dramatically increase productivity, spend more time with families-in-need, and save more than 200,000 pages of paper in the process (in only 24 months) – and this is just the beginning.

Solving technical problems for TCRC was the easy part of their solution. The hard part was the political and legal hurdles in using eSignature and Digital Transaction Management (DTM) technology. Dominic Namnath, CIO of Tri-Counties Regional Center, embarked on a mission to obtain the required approvals to better serve the needs of the community. In 2013, Dominic approached his congressional representative in Santa Barbara, California to ask for approval in Washington, DC to use eSignatures for the Federal Medicaid Waiver Program. Lawmakers in Washington kicked this issue back to the State of California’s Centers for Medicare and Medicaid Services (CMS) department. Gloria Nagle, the Director of CMS California, responded with a letter approving the use of Docusign for all documentation required by CMS. Additionally, with approval of Governor Brown, California Secretary of State Alex Padilla amended the civil code on June 30, 2015 with Assembly Bill (AB) AB432. The Bill specified that electronic signatures shall be as effective as original signatures. However, AB432 caused some confusion as to what constituted an eSignature, so Governor Brown clarified in AB2296 on August 19, 2016 that an electronic signature can be an “electronic sound, symbol, or process attached to or logically associated with an electronic record and executed or adopted by a person with the intent to sign the electronic record.”

With these two assembly bills signed into law, a Program Directive from the CA Department of Developmental Services (DDS) was sent to all Regional Centers in California in August 2016 authorizing electronic signatures (and thereby DocuSign) across-the-board in all its agencies, including CMS. In fact, CMS is now required to offer electronic signatures as an option for CMS services.

TCRC employs approximately two hundred social workers who are trained to help people and prefer not to spend their time burdened with state-required paperwork. With social work, there is a geometric progression of the number of people being served and the effort required to serve them, which is shown in Figure 1. 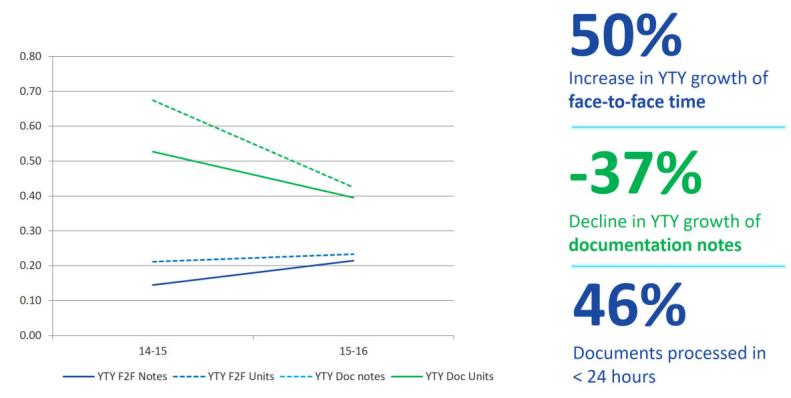 Figure 1 shows that since DocuSign was implemented in 2014, the number of documentation units decreased by 37%, while face-to-face time with those in need increased 50%.

TCRC’s digital transformation required analysis of all the parts of the process that cause friction in the organization, and to determine which friction points could be solved by using vendor APIs. Dominic attributes TCRC’s success to what he calls “the secret sauce” of mixing all these ingredients (APIs) together for a complete solution.

By selecting technology partners that he trusts, such as Box, Canon, and DocuSign, he can focus on tackling the difficult business problems and rely on the APIs provided by technology partners, thereby eliminating having to recreate the technological wheel and hire technical experts for each solution. For example, TCRC does not have to be an expert in securely encrypting, hashing, signing and storing documents in the cloud. It can rely on DocuSign to do that and to make implementation easy using its eSignature API.

One specific use case for TCRC is form 3770 (Medicaid Waiver Eligibility Record). Each year, those being provided Medicaid based services must be recertified. Before implementing DocuSign into their workflow, this seemingly simple process was actually comprised of ten separate steps, as shown in Figure 2.

Figure 2: Processing Form 3770 Resulted in a Ten-Step Process That Could Take One Month.

The ten-step process shown in Figure 2 was paper-based and manual, taking up to one month to fully-execute a document. This incredible lag caused issues for the participants in the program who rely on TCRC’s services, as well as for those awaiting payment.

The new process dramatically improved efficiency. With DocuSign, as shown in Figure 3, 46% of documents are now completed in less than 24 hours, resulting in services provided much faster.

How does it all work? Technically, it’s not very complex due to the modular nature and the way Dominic approached the business challenges. He looked for the friction points and carved-out specific units of functionality that could be compartmentalized. 3770 recertification documents were already being created from metadata in a legacy IBM AS/400 system. This is where the process all starts and the “secret sauce” gets added to the mix.

TCRC uses the IBM AS/400 to pull the service coordinator’s ID, name, manager, administrative assistant, program participant data, and other metadata. Part of the participant data includes a list of possible medical conditions for the participant, which is implemented as checkboxes that are programmatically added to the document using the DocuSign eSignature API, resulting in the document shown in Figure 4. 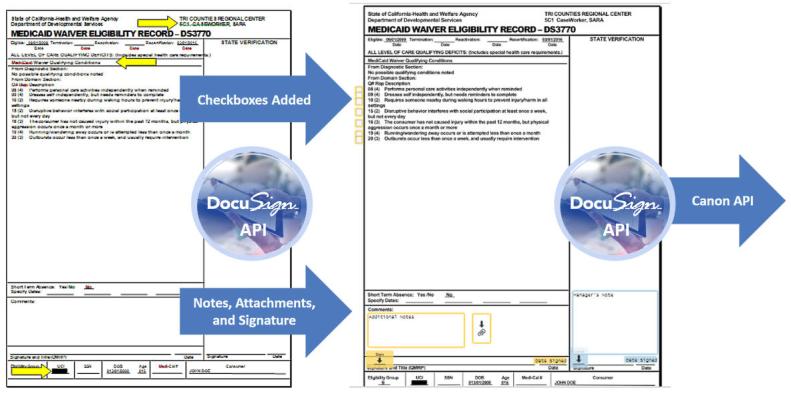 TCRC makes API calls to create and send documents to the internal recipients from a 3770 document template – thereby assigning the routing programmatically using the API. The envelope containing the documents is routed, using standard DocuSign functionality, first to the service coordinator who checks the participant’s medical conditions for recertification, adds any notes, attaches additional documents, and then signs the document. The envelope is then routed to the service coordinator’s manager for approval, and the administrative assistant is copied.

After the 3770 document is fully signed and completed, it is placed automatically into a Box folder. TCRC’s developers created a .NET listening app that watches for new files in this folder and sends the final documents through Canon’s API to store the documents in their imaging system for permanent storage and reporting to the State of California.

How long did all this take to develop? All the programming using the DocuSign, Box, and Canon APIs, plus looking up the metadata in the IBM AS/400 took less than 140 hours of total development time, with only two developers. This results in tremendous value to TCRC in being able to expedite services to its clients, increase face-to-face time for its service coordinators, and save paper and processing costs – all with a minimum of expense.

Tri-Counties Regional Center considers 2016 to be the year of integration. While some companies may be slow to adopt a digital transformation strategy when there is friction, many agencies in the State of California, such as TCRC, have managed to overcome this friction and move forward for the sake of its clients, using APIs to remove the friction.

TCRC’s goal is to save 500,000 pages of paper by the end of 2017. They have digitally transformed many paper forms in the areas of Finance and Administration, Human Resources, Resource Development, and some Federal programs, but are looking to implement even more, such as their Early Start enrollment, IPP Signature Page, and a Special Incident Report. All-in-all, TCRC is looking to include more than 200 individual documents into their “secret sauce” recipe. Due to the hard work TCRC did which resulted in Governor Brown signing AB432 and AB2296, the road is clear to achieve their goal of a complete digital transformation by the end of 2018. What’s more is that other regional centers across the state are looking to replicate this success for their own programs.