Electronic signatures (e-signatures), which demonstrate an individual’s intent to agree to something, aren’t new. Their acceptance and use in many countries around the world have been widespread for years. Hundreds of millions of users worldwide are comfortable signing documents electronically. But, are electronic signatures legal?

In this blog post, we’ll cover what makes e-signatures legally binding, whether they’re valid in all U.S. states, whether there are exceptions, what exactly is an e-signature (a lot of people think it’s a digital image of the “squiggly line,” i.e. your wet signature, but that’s not the case) and more.

In the U.S. and other industrialized countries, electronic signatures and records can carry the same weight and legal effect as traditional handwritten signatures and paper documents. The Electronic Signatures in Global and National Commerce Act (ESIGN) and the Uniform Electronic Transactions Act (UETA) in the United States, the Electronic Identification and Trust Services Regulation (eIDAS) in the European Union and other similar laws throughout the world were enacted to recognize the enforceability of e-signatures.

In fact, when e-signatures are combined with tamper sealing, strong authentication, world-class security and an audit trail, they can be more enforceable than wet signatures because of the court admissible evidence they contain.

That said, like anything in life, there are some exceptions to these laws (see the next question “Can legal documents be signed electronically?”). However, it’s not that e-signatures can’t be used in these situations. It’s just that they may be subject to additional legal requirements in order to be enforceable. You should always look to the laws in your jurisdiction regarding your specific e-signature use case.

Can legal documents be signed electronically?

Electronic documents and signatures are broadly enforceable for business and personal transactions in industrialized countries around the world. Many court filings can also be signed electronically, including:

However, there are some use cases that aren’t typically appropriate for e-signature or aren’t covered by ESIGN or other country-specific laws, like the few examples below. You should seek legal advice as to whether e-signatures are allowed in these situations and what the requirements are:

Are electronic signatures valid in all states?

Yes, electronic signatures are valid in all U.S. states and are granted the same legal status as handwritten signatures under state laws.

The District of Columbia, Puerto Rico, the Virgin Islands and 47 states have adopted UETA, and most of these have made few, if any, modifications to UETA. Only three states (New York, Illinois and Washington) maintain their own independently developed laws, but all of them are consistent with UETA.

However, even with the slight differences among the states, there’s enough consistency to permit all businesses to adopt a single process for electronically signing agreements across the country for most use cases.

Learn more in the "Electronic Signatures and Transactions in the U.S." whitepaper.

What is the difference between a digital signature and an electronic signature?

Digital signatures are a specific type of e-signature that has an additional signer authentication element. Digital signatures include a “digital certificate” that’s issued only when the identity of the signer is validated, and they use a type of encryption called public key infrastructure (PKI) to associate a signer with a document and provide additional assurance as to the signer’s identity.

E-signatures, on the other hand, cover the full range of technologies and solutions to create signatures electronically, from simple images of a signature attached to an electronic document to PKI-based signatures. A variety of capture methods can be used, such as:

The extra steps needed to obtain a digital signature are unnecessary for many transactions in the U.S., so they’re rarely used. An electronic signature, like DocuSign eSignature, is typically all a customer needs to create a legally enforceable document. For those instances where more authentication is required in the U.S. (e.g., certain transactions in regulated industries such as life sciences), tools like DocuSign Standards-Based Signatures, can be used to digitally sign a document. This also applies to regions like the European Union, where digital signatures are more common. 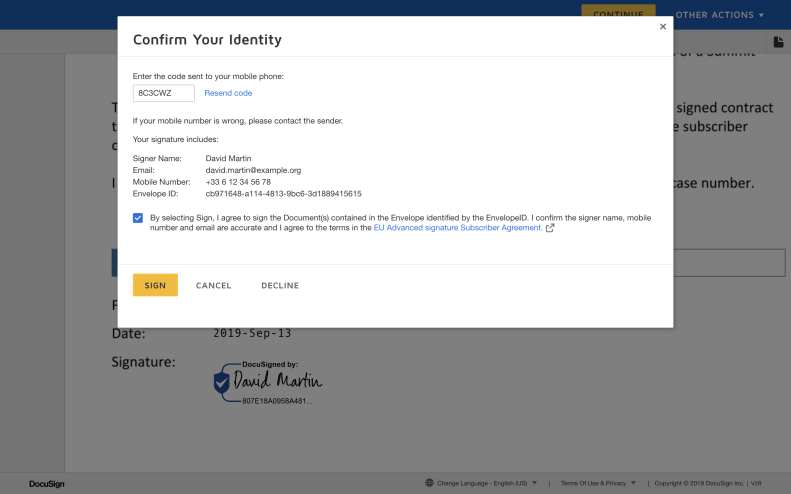 The best approach is to evaluate whether there’s a need for a digital signature, and if not, why complicate things? Keep it simple—especially since a DocuSign eSignature without the digital certificate is just as secure and will always include the DocuSign Certificate of Completion.

DocuSign eSignature can help you comply with ESIGN, UETA, eIDAS, and other national laws worldwide, enabling you to sign agreements that are legally enforceable.

For each document, DocuSign eSignature automatically generates and stores a complete, time-stamped history of every send, view, print, sign or decline action. This audit trail is captured in a Certificate of Completion for each transaction that provides the proof for legally binding electronic signatures.

More than 500,000 customers around the world use DocuSign eSignature to:

For more on the admissibility of DocuSign eSignatures and electronic signatures overall, read DocuSign’s “Court Support for Electronic Signatures in the United States” whitepaper.

Agreement Actions is a new eSignature feature with which admins can easily configure rules to automate common post-signature actions.

C.A.R. Standard Forms for Real Estate Transactions to be Available in the DocuSign Forms Library

Real estate transactions are complex, paper-intensive, regulated processes that involve a diverse group of stakeholders and a high volume of documents.