At DocuSign we continually build and grow our developer community. We do this in a variety of ways, but participating in conferences, events, and hackathons is the most important. We were a proud sponsor of DeveloperWeek 2018 hackathon in San Francisco, from February 3-4, 2018.

We offered a great cash (well actually gift card) prize to the team who developed a working app that showed the best use of the DocuSign eSignature API. We specifically kept our challenge generic so that it sparks creativity.

Coding as Far as the Eye Can See

The hackathon took place at Galvanize over the two-day weekend with an amazing turnout! Galvanize is such a great venue for hackathons. Lots of hackers stopped by our table to discuss the DocuSign eSignature API. We talked about different scenarios and use-cases. We also discussed how easy it is to use our SDKs and we even helped a few with some of the coding details to get teams started.

We had a total of nine teams register for our challenge and seven of them were able to present working apps that solved real-world problems (in alphabetical order):

Align (pictured left) – This team of three created an app using our eSignature API to solve an interesting medical problem. Very often when a medical form needs to be completed by a family member, there are many questions that arise. Align’s solution is to store document forms as DocuSign templates and their app will populate the necessary form fields, ready for eSignature. The advantage with their app is because someone else may not know how to fill out the form, they’ve integrated a chat window to speak with the patient’s physician or other representative to assist. The front-end code was written in react, while the chat window is provided as a widget by Agora. 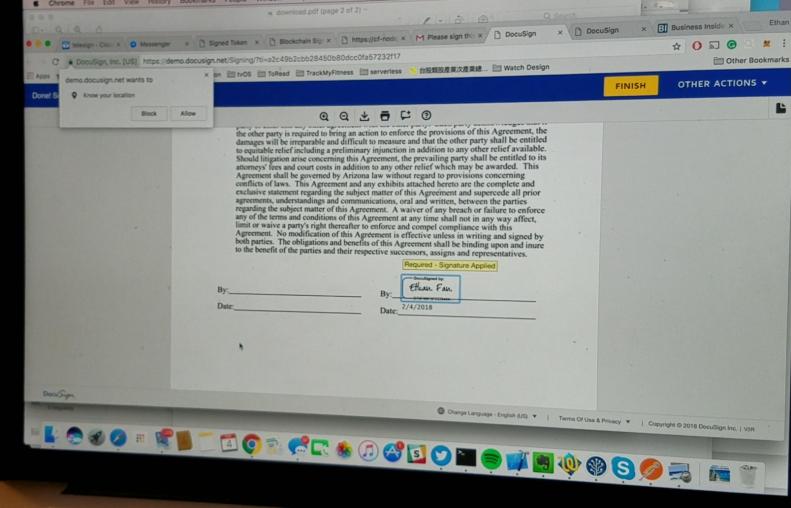 DocuSign the Blockchain (pictured right) – This team of two decided to solve the problem of blockchain transactions not being legally-binding. They demoed their concept by transferring a blockchain token from one owner to another. Their app “wrapped” the transaction by creating an agreement to be electronically signed by all parties that authorize the transaction. This creates legal boundaries around Blockchain because it isn’t just an anonymous transfer, but instead each party actually agrees to the transaction. The team implemented this solution using the DocuSign eSignature API to send templates to all parties involved in the transaction and they track the status of each and display it on a Blockchain dashboard.

LivIt (pictured left) – This team of one decided to solve the problem of delivery drivers needing a signature to leave a package at the recipient’s doorstep, but nobody being home to sign for the package. By using our iOS Offline Templates SDK, this team created an app that enables the delivery driver to take a picture of a package and send that to the recipient to eSign for the package. The LivIt app was working despite the cracked iPhone screen. ? 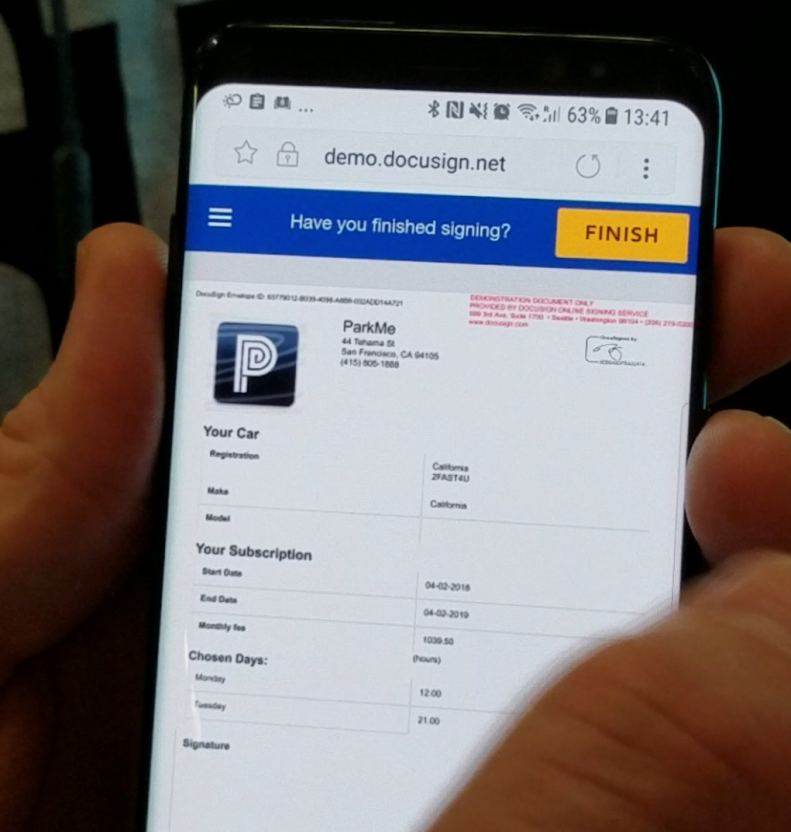 The app works by providing a map on a mobile device that enables users to select primary and secondary locations where they would like to park and the length of time for a parking “subscription.” The next step is to indicate which car will park, so the ParkMe team built OCR recognition into their app, whereby the user takes a picture of their license plate. Finally, both parties sign the agreement for the parking subscription by calling the DocuSign eSignature API to automatically route the agreement for signature. 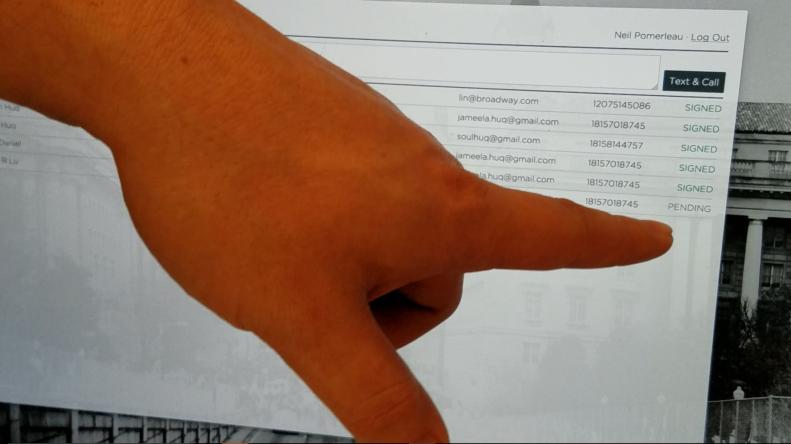 PetitionThat (pictured left) – This team of three hackers entered the political realm by creating a platform to affect social change. This platform enables organizers to garner support for their cause by allowing the public to sign petitions online. PetitionThat verifies all petitions and users to guarantee authenticity. In addition to integrating he DocuSign eSignature API, they also used TeleSign for phone number verification and SmartSheet for collecting the petition data. Their platform sits on the NetApp NFS storage and uses Amazon Web Services (AWS). 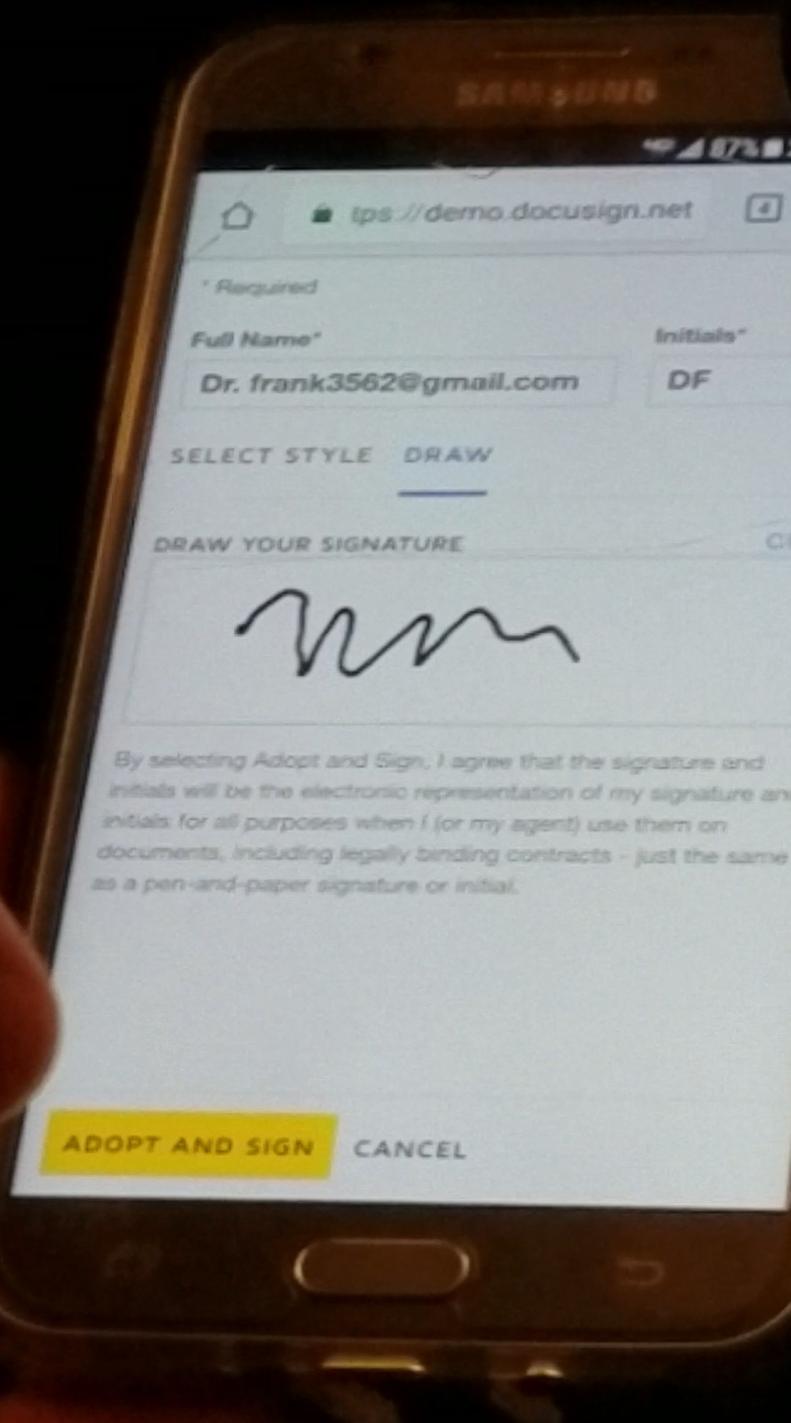 SNAPP-Rx (pictured right) – This team of five is aiming to solve what they say is a major problem in the medical industry. They claim there are 7,000 deaths each year due to illegibility errors in prescriptions. Their app was created to solve this issue. The concept is to do handwriting recognition (OCR) on the prescription from the doctor and have an assistant, such as a nurse, verify the prescription and electronically sign a document that the pharmacy receives.

SNAPP-Rx uses the DocuSign eSignature API for the eSignature piece, but also TeleSign to verify the authenticity of the parties on each end of the transaction. SNAPP-Rx says their app will not only save lives, but also time and billions of dollars by preventing lost revenue.

Voyager (pictured left) – This team of four created an innovative travel app that guides travelers to destinations based on interests and selected options, such as desired activities and locations. Based on these selections, Voyager extracts locations and arranges a real-time itinerary using TomTom’s Search Along Route API.

Voyager also used the DocuSign eSignature API to not only prompt the user to sign the authorization for the travel, but also to collect payment for the itinerary using the Payments API. After the document is signed and payment is made, Voyager receives notification of the completed envelope and issues the eTicket for travel.

Voyager also used PhoneGap and Javascript for the development of the application.

And The Winner Is… 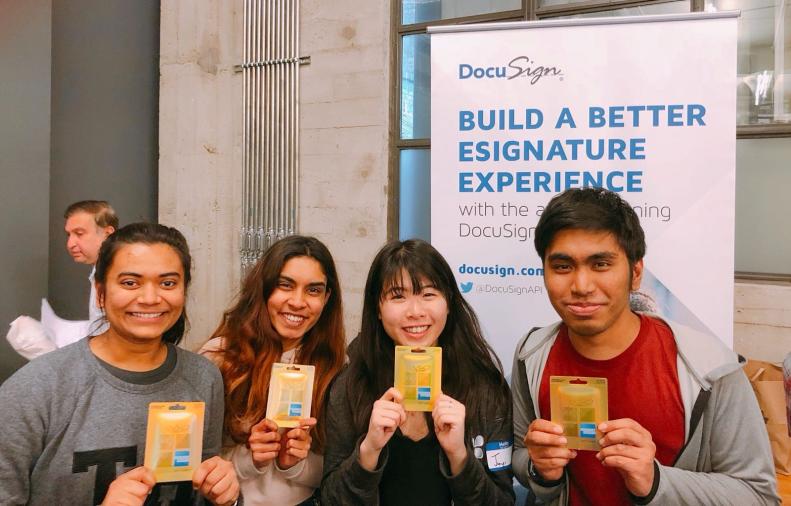 The DocuSign judges were impressed with the team’s ability to produce a full-featured application using multiple DocuSign technologies and therefore were the winner of this year’s hackathon challenge.

To prepare you for next year’s DeveloperWeek hackathon, visit these DocuSign developer resources: