DocuSign was a Summit sponsor at Salesforce’s TrailheaDX 2018 conference last week in San Francisco, from March 28-29, 2018. TrailheaDX is Salesforce’s annual developer conference. As you likely know, DocuSign is all about developers! We had a great booth on the tradeshow floor (called the Trailhead) where the interest in our technologies created a steady flow of traffic for the two days of the conference. Below is an image of me demoing our DocuSign for Salesforce integration, along with DocuSign Payments. While our booth demo was on the Salesforce Lightning environment, we advised people that we also have a DocuSign for Salesforce managed package that works in the Salesforce Classic environment as well. We also showed DocuSign integration with Salesforce CPQ.

In only two days, we did almost 400 demos – close to 20% more than last year’s TrailheaDX conference. There were lots of great questions, feedback, and very positive reception of our demos.

The names of Salesforce owners and contacts that we use in our demos are fictitious, but we had one very funny coincidence when Chris Smith came by our booth for a demo and discovered that we were using him as our fictitious name. We had a great laugh together and he agreed to pose for this picture: 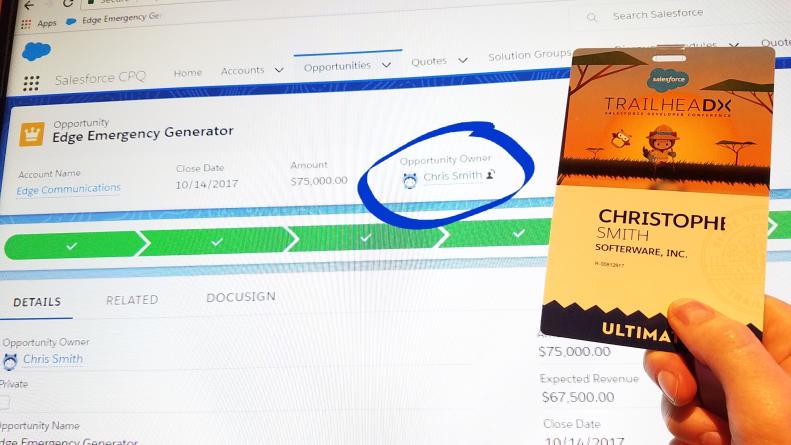 Maybe for next year, we should create a demo where we scan someone’s badge and the demo becomes personalized! ? 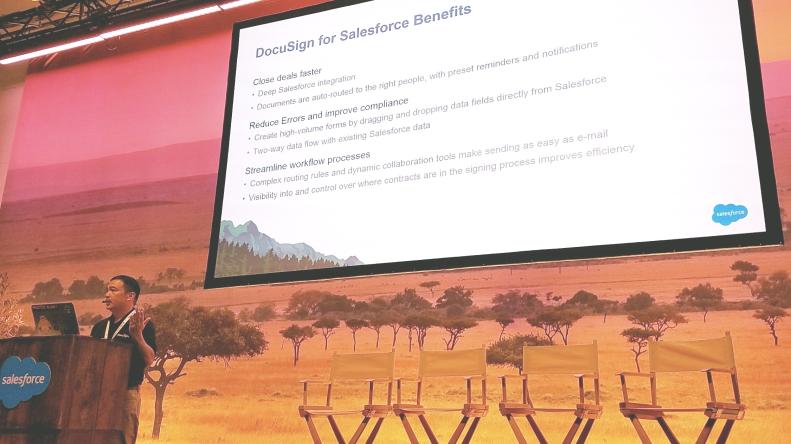 Shweta Dhamapurkar’s presentation, called Clicks, Code, Customized DocuSign, showing how to customize DocuSign for Salesforce with custom buttons and code for more complex scenarios. Shweta also showed custom code examples, documents, and admin settings, to name a few. She also discussed an upcoming feature: Lightning-optimized custom buttons, which require no code. This was such a hit that many people came back to the Trailhead booth to ask her some follow-up questions. 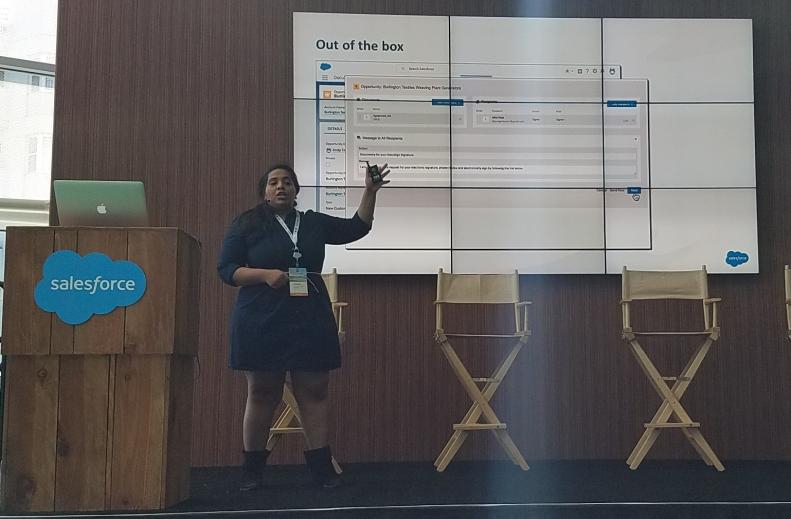 Near the end of the conference, there was a TrailheaDX Demo Jam, where each of the sponsors had two minutes to do a quick demo of their software. Here’s a DocuSign for Salesforce engineer, Ken Naku, doing the DocuSign demo: 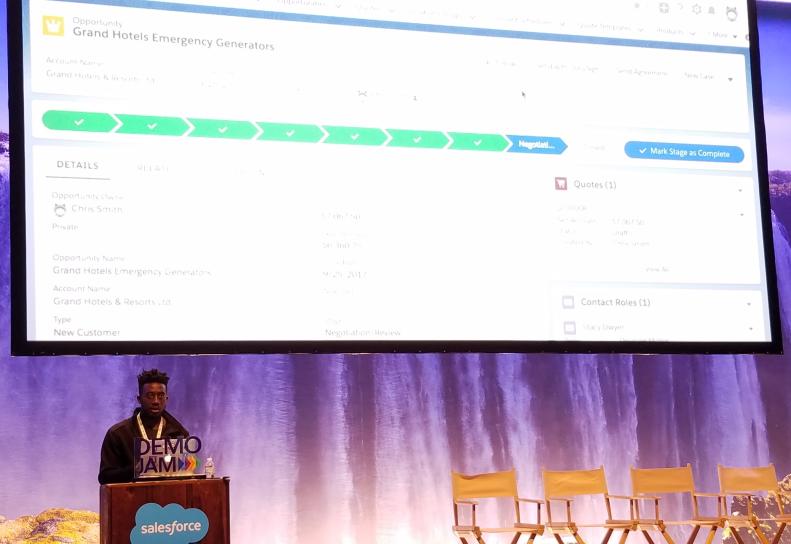 It’s not all about the demos

In the afternoons of each of the conference days, we conducted a random drawing for a Nintendo Switch. Once again, this drew huge crowds, which you can see here:

And the winners are: 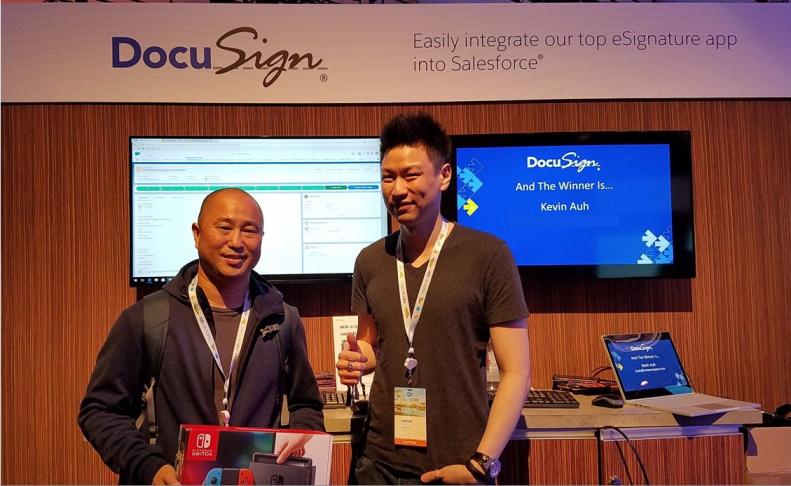 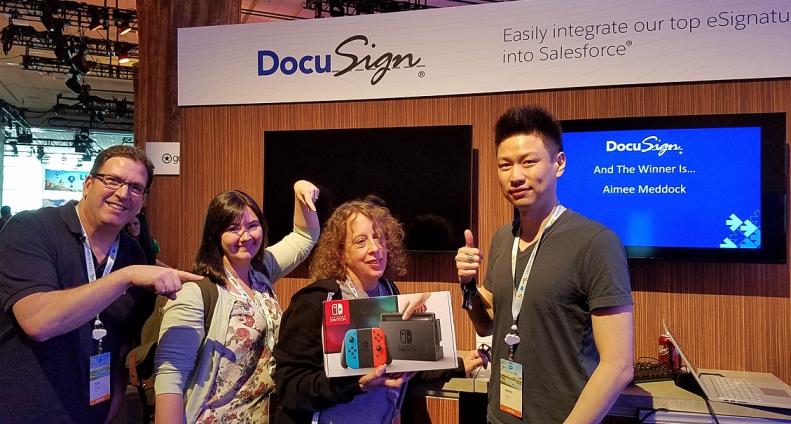 To get a better idea of how two of our customers are using DocuSign for Salesforce, see this blog post on Retail Capital’s success story and this video from BNY Melon. DocuSign for Salesforce is available for free trial in the Salesforce AppExchange, so even if you couldn’t make the conference to see the live demo, you can still try it out for yourself.

Over the course of the two days, we got to hear from several inspiring and knowledgeable individuals, both at and away from the DocuSign booth. For starters, Betty Reid Soskin joined the Salesforce developer and admin community for a Q&A about her life as a female Trailblazer. She’s 96-years-old and still an active National Park Ranger. Her story on enduring through the incredible hardships of racism to entering community and state politics to being a park ranger at nearly 100 years old, left many of us with a few tears and lots of laughs.

Later that same day, Salesforce founders Marc Benioff and Parker Harris entered the Keynote Room for what was an amazing Q&A to put a cap on Day 1 of TrailheaDX. They spoke of their early days before Salesforce, how neither of them took computer science courses in college, and how much (or little) they happen to code in recent years. We loved some of the honesty they were able to provide, including the hardships along the way. One tip from Parker that stuck out – if the only solution you can think of you know, nonetheless, isn’t the right one, then don’t implement it! A bad solution is much worse than no solution.

Finally, bringing the conference to an end was none other than the man from Tatooine: Luke Skywalker. Nope – scratch that. Mark Hamill. We loved his chat with Ina Fried. Truly, two great Trailblazers right there!

It was a great conference! Thanks to all who stopped by our booth or attended our sessions. See you at next year’s TrailheaDX.